It’s a fresh season of cooking for me, after my girlfriend suggested experimenting on dishes, so I thought why not pick up the ladle and wok and touch base with my Jamie Oliver (asian-style) side of me that has been dormant since I was 15.

First dish – Longevity noodles, named after the packet brand of noodles that mummy always gets from the market. 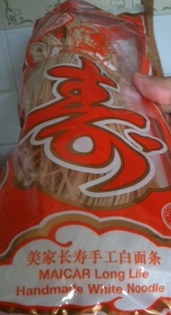 Next it’s time to do some chopping and slicing, or as Chef Martin Yan ala Yan Can Cook fame of the 80s (yup I started watching cooking shows from a tender age) likes to say, you julienne it into thin slices. We start from the garlic (about 6 separated cloves), cut off both ends, lightly use the chopper to bruise it (so peeling becomes so easy), then julienne the garlic into thin slices (about 2mm). Then dice it up.

Take some pork belly or 三层肉 and also julienne it, after boiling in water with one teaspoon of salt. I’m not too good with estimation so I guess this looks like about 500g of pork.

Also julienne the Chinese black mushrooms. And the Chinese Chives (Gu Chai) cut into 4-5cm strips. Together with bean sprouts (as much as you want – i love ’em so I like lots).

Before I forget, while cooking the pork, I’d also add the chicken bones in to make the stock base for the noodles. Slow fire for 20 mins then take out the pork. Continuing cooking the chicken bones for 1 hour. The soup base will reduce from original half pot to about 1/4 pot. See video below:

Add oil (guesstimation about 10 tablespoons). Then brown the mushrooms.

Take out the mushrooms. Leave the oil, and brown the garlic. Take note that the smaller bits of garlic tend to brown very fast. That’s why when dicing we do not dice too finely, else burnt garlic is very bitter. So the garlic should look like this. 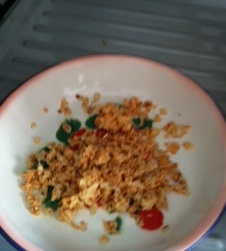 Leave a quarter of the garlic in the wok with the oil, and time to stir fry the bean sprouts plus Chinese chives. Stir fry till half cooked, then take out. Next we pour the soup base into the wok and throw in the browned mushrooms to simmer.

Once the base boils, throw in the noodles, the vegetables, the meat and keep “pulling” up the noodles to mix it all up. 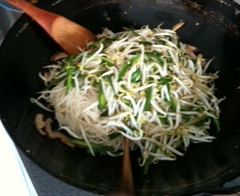 I like to use chopsticks on my right hand and a wooden ladle on the left hand for this. Keep tasting the noodles and adding soup base/ water to adjust to your right level of taste.

Finally I plate it with my favorite sliced preserved green chilies. Add prawns if you like. Some of you may like sliced red chillies. 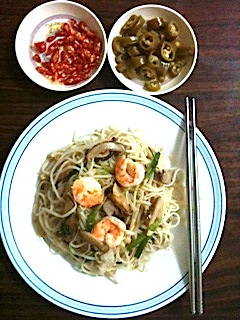 Overall a simple dish to whip up to serve a group of people. This time I used 2 packets which can feed about 8 pax.