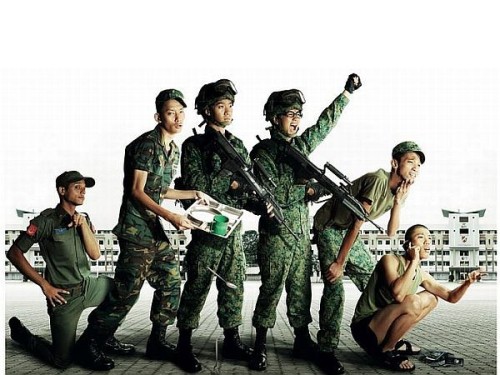 The timing that I caught this movie could not be more apt.

I outpro (out-processd) from my 6th high key ICT (in-camp training) on a Thursday and caught this army movie on the very next day, with the past 3 weeks’ still extremely fresh in my mind. See my recent post.

I go to see this movie knowing what I’ll expect from a typical Jack Neo show – local dialects with Singaporean slapstick humour. So I don’t expect any Oscar-winning cinematography, thought-provoking script, thespian acting or heart wrenching music scores. Any other extras will be a bonus.

Besides all the real depictions of army life then and now, I kinda liked his opening camera-panning sequence over many Singaporean landmarks and districts. It’s just something I don’t get to see much on the big screen, so familiarity sinks very nicely close to my heart.

The opening sequence of the attack and war scenes in familiar parts of Singapore did strike a chord in me, and the CGI sequences, though not James Cameron level, was passable. I was surprised that SAF (Singapore Armed Forces) gave Jack Neo lots of assistance in terms of military equipment, vehicles, camps and locations shoots.

The ubiquitous CB leaf scene puzzled me for the blurred out (self censorship I suppose?) portion where they showed why it was called The CB leaf. I thought that there was really nothing R-rated in showing the actual portion of the base stem where it opened into the leaf.

And one of my favourite sergeants was the one from the past, acted by Justin Mission.

This character suits Justin to a “T”. Knowing him from his D&D emcee gigs, he is a real joker and one extremely animated character. Something like our Singapore version of Jim Carrey. And the foul-mouthed Hokkien spewing, wise-cracking and psycho sergeant is extremely fun to watch.

The main lead character is nothing to shout about. I prefer his buddy, Mr Lobang king, who is all street-smarts and also quite a comedian.

That said, I reckon Jack Neo is the smartest alec around, splitting this movie into 2 parts, with Part 2 slated for a February 2013 release during the CNY (Chinese New Year) period.

Of CB Leaves and Sergeants

Just two days ago while I was cooped up on a hill in the western part of Singapore (where they have left nature intact) with 12 other men in green, we were running out of topics to talk about.

We had run through the gamut of Religion (scandals mostly), Politics (completely scandalous), and now like most guys deprived of a skirt for days on end, we moved on to Sex (Centerfold of Scandals in “Corruption”-Free but not Sex-Free Singapore).

One of the guys who was doing his last high-key ICT (In Camp Training) confessed that he did not know what a CB leaf (see picture) was or why it was called so (“Chee Bye” is the Hokkien phrase for the vagina).

The gang then pounced on our newbie, the latest posting to our node (1st ICT) and certainly one guy who we affectionately called “Boy Boy” for his obedience and lack of a certain “weathered” experience of the world. Gosh, “Boy Boy” also calls me Sergeant all the time and I believe I’ve hardly been addressed as such in all of my reservist days and even my active days.

After a while, with much puzzled look on the size of the leaf (nope, that’s not it), it’s overall shape (not so too), he finally discovered the answer (just google it and you’ll find something). Much to our chagrin, he told us he just recently tied the knot two months ago.

It’s really something to bear with the discomfort of the great outdoors in our army greens, eating combat rations and pooping in the bushes in the fastest possible time (to get the least number of mosquito bites on our bare bottoms and exposed thighs). Hell, I know of several buddies who have such mental willpower to hold it all in and self-constipate so that they can altogether avoid the unpleasant business of doing big business.

It’s another thing when you put all these men together with nothing much to do but talk. Men just don’t talk like women do. We put out all the facts, we analyse, we criticise, and we jump at the opportunity to offer solutions.

And then we move on to other news-worthy topics.

After that, we look for the nearest stack of cards, or some solid fuel to go build a fire. Nowadays, I notice the handphone is quite a good distraction too.

Good thing was that our reinforcements came in the nick of time, and now jolly old Sergeant can go to watch Jack Neo’s Ah Boys to Men in the movie theatre and laugh at the good ‘ol CB leaf shenanigans.